Your Browser Does Not Support JavaScript. Please Update Your Browser and reload page. Have a nice day! Finalists have established themselves with a passion and encourage others: Everyone should realize his ideas – EICS
Verstecken

Finalists have established themselves with a passion and encourage others: Everyone should realize his ideas

Finalists have established themselves with a passion and encourage others: Everyone should realize his ideas

The finalists for the Deutschen Gründerpreis 2013 (2013 Germany Founder’s Award) in the categories ‘StartUp’ and ‘Rising Stars’ have been voted. Six outstanding enterprises were nominated by a jury consisting of representatives of the initiators stern, Sparkassen, ZDF and Porsche as well as the sponsors of the prize. Who will be granted the sought-after award will be announced to the candidates during the awards ceremony on June 25, 2013, at the ZDF Zollernhof in Berlin.

Clients of EICS Group GmbH Engineering Solutions in Munich being nominated in the ‘StartUp’ category are also enjoying full service. Hasan Kurum as graduated engineer and his team are specialized in high-quality engineering services and complex parts and components, predominantly manufactured from carbon fiber in hybrid construction. „At EICS, everything comes from one source – from design up to small production runs from our own manufacturing sites in Turkey“, so the 43-year-old Engineer for Aviation and Aerospace Technology. Renowned customers from the automotive, aviation or IT industry such as Audi, Bosch, Porsche, Webasto, ElringKlinger, BWI and many other partners trust in the know-how, top-quality and reliability of the experienced manager who has already co-started several highly successful supply companies before going independent. 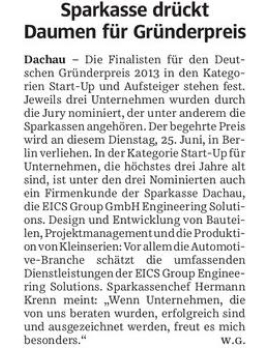